This past June (2016), near the end of our trip down the Florida East Coast and then over and up the Gulf Coast, my wife and I were trying to figure out how to pay for parking as we were getting ready to go out shelling on Barefoot Beach in Bonita Springs (one of those parking kiosks that refused to cooperate) when a guy who looked like he’d lain out in the sun his entire life (could probably make shoes out of his skin) stopped and said, “It doesn’t like $1.00 bills.” We exchanged other words which I don’t recall and he went on his way. We shifted to a credit card, fussed until we figured out the simple instructions, and then returned to our car with the 2-hour parking receipt clutched in our hands. The helpful, well tanned, passerby was sitting in his car, right next to ours and I noticed a sign on the side of his door advertising that he was Jake Devlin, author of The Devlin Deception: An Anti-Political Absurdist Thriller, the first in the The Devlin Quatrology.

An author! I had to engage and I’m sure glad I did. 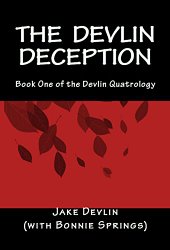 Jake Devlin (not his real name, but I’ll not divulge) went on to describe his quatrology, which was both intriguing and, well, a little strange. I found Jake to be a character all in himself . . . or more clearly, he is the character, that is the main character in the book. Jake Devlin writes from the view point of Jake Devlin researching and writing the story about how Gordon Donne goes about buying and fixing America. Once home I researched Jake and his series and debated whether I should purchase The Devlin Deception, the first in a series that he calls The Devlin Quatrology. The concept of the story was so intriguing, I just had to.

It took a few chapters to get into the flow of the story, the scenes jumping back and forth between the writer and the story he is writing. Jake Devlin’s (the character Jake Devlin not the author, or maybe the author too… not sure who is actually on the beach with him) friends and acquaintances on the beach are a colorful mix of CIA, FBI, NSA, BSA, whatever (I got lost in all the XXX’s) and beach bums consisting of spys, kids and retirees. Hard to tell one from the other. At the time of this writing I am only half way through and I’m expecting a lot more surprises.

The bottom line is, though not all that realistic (I’m reading fiction . . . what can I expect? Has anyone read that series about some kid named Potter, Harry?) I am enjoying picking up my iPad and seeing where it goes next. Will Donne actually fix the country before one of the assassination attempts gets him? Will Jake and Pam stop dancing around the sexual tension building between them? Why are the Mimosa Twins listening in on their every word. Are they CIA, FBI, NSA, CBS, BSA, whatever, spies? Why does Sonya keep wanting Jake to smoke a cherry-peach cigar? They’re only ten bucks a carton at B2B Liquors, she says. She’s relentless.

Anyway, if you want something realistic, read non-fiction, maybe pickup a textbook on the history of America. Oh, wait a minute, I hear that’s pretty much fiction, too.

I am definitely being entertained. I highly recommend The Devlin Deception for anyone wanting a tongue & cheek answer to fixing America. Sometimes even tongue & cheek speaks a bit of truth.